Picking Up the 1-2 Record for the Cats

*Published on the Western Carolina Journalist*

The University of Tennessee came off of a loss to Oklahoma in the previous week, Sept. 12, and did not hold back when it came to the Catamounts

With low hope going into the end of the second quarter, freshman kicker Logan Howard put three up on the board but that did not offset the 34 the Vols had already had on them. With 102,136 total people in attendance the slim purple cheering section was barely noticeable in the giant sea of orange but when sophomore, Detrez Newsome, scored a 64-yard touchdown in the fourth quarter and the purple rose again with pride of making it into double digits.

“I think that we are just trying to control what we can control moving forward. Trying to just not beat ourselves. Going into that environment is hard for any team to play in. I thought there was some good things we did in that game and some things we could improve on but I think as a team we stayed together and fought until the end” says Ian Berryman, punter, on how they plan to improve and not let it hold the team back. 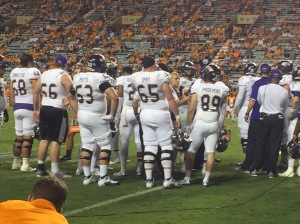 Tennessee was a tough challenge that will now be taken as a learning tool just for the Catamounts to move forward in the weeks to come.

“We went into the Tennessee game with the mindset to put up and fight and show the country who Western Carolina is. The Tennessee game was a game for us to sharpen our tools to get ready for the rest of the SoCon games we have left this season. We are looking forward and getting prepared to win the SoCon Championship this year,” says Jordan Mathis, wide receiver.

Western Carolina faces Presbyterian College on Oct. 3 following a bye-week in hopes of coming out stronger and on top before the conference games start.

“WCU still has plenty of time to redeem the 1-2 record and we still have Texas A&M at the end of the season in November. With a bye-week coming up we will use it to mentally prepare for the rest of the season. We are hoping our fans don’t give up on us over that game” says Ethan James, offensive lineman.

Family weekend is also on the same weekend so bring your families and prepare for a good matchup against Presbyterian College with kickoff at 3:30 p.m.