The countdown is on! I officially have 4 days left at my internship and in Mississippi and what a wild ride this has been.

I captioned my first picture at the stations sign “Buckle up for a wild ride” not expecting my summer to actually follow those words. 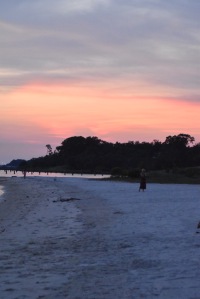 So I have been gone for a little while…I have been working like crazy both jobs but trying to dedicate most of my time to the TV station for that is the sole reason of my stay in Mississippi.

When we left off, I had finished covering a police chase and was going into the weekend full of baseball (my favorite).

Going into that next week, I started to put together a photo-story of the Shuckers trying to overcome a losing streak. I will try to get away to publish that here on my website, but for now, I’ll let you just wonder how it went. I spent day in and out trying to get new photos from different angles and seeing how I could improve my own photography skills. (Dad if you’re reading this, there is a new camera lens in our amazon cart wish-list….Christmas maybe, haha??)

During this week I was on my toes, some because of a crazy incident that happened at home Sunday night. I won’t go into too many details about that but, God bless the Ocean Springs police department for putting up with my needy self for a good week. As well as all the people who let me couch surf for 3 days. 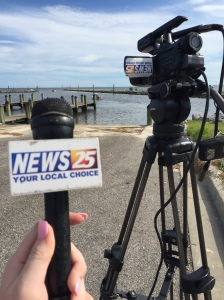 Back into the station, this week we covered a missing boater accident. This was the first time I was able to do a “look live” shot which was very fun for myself on really rough circumstances. Basically having an outline of what I wanted to say/needed to say in my head and creating that feel that I am actually on air for the live shot. Here, I started working more on deepening my voice so I did not have such a high pitched voice while reporting. It is a work in progress…and I call it my “professional voice”…I don’t like it but it is part of the business.

I was also able to go on my first breaking news story this week. Kendra was the reporter on this one. We got word of a train hitting a car in Biloxi for what might be the 12th time this year…its insane how many of these we get.

On this live shot, we had to adapt to our surroundings and our equipment. I say this because our camera batteries were dead and we did not have a lot of time before we were supposed to go live. Instead we went live on Facebook until Taylor got there with the new camera so we could go live at 10. Even then, we had to adapt because we did not have an IFB to listen in to the show, so Taylor who was on the phone with production was giving Kendra the cue to go. Very fast pace and very cool to see play out.

Some more stories covered this week were just basic stories about little things going on around town. But I was able to get more infront of camera time. 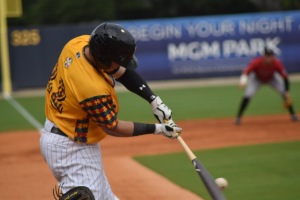 When the Shuckers finally came back, they were here on the weekend and of course I was there. I did my own photos and story on their jerseys they featured at one of the games. They were supporting Autism Awareness. Which was very cool to see! My sororities philanthropy is Autism Speaks, so I have found myself learning more and being excited to see this cause brought to life. 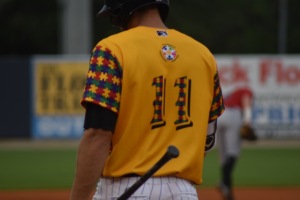 Going into last week, I was on my way to work when traffic on the highway was stopped and backup up pretty far..this was because of two wrecks that happened. Because I was so close to them I was able to stop and record some of the footage of it to send into the newsroom to air. I realized I felt like a legit reporter and hit the point of my career when you realize you do work for the news when you record anything and everything big or small happening.

Later this week (Thursday 07/28) I was able to try my hand at anchoring. I sat at the desk to practice anchoring the sports block for a good 45 minutes. With help from the production crew and others in the area who were giving me pointers and walking me through it step-by-step. It was nerve wracking but after a while you get relaxed and it comes easier.

This is my last week at the internship as I stated in the beginning so my blogs about the summer will be coming to a close. I will have one final one posted (hopefully) Friday the 4th.

I am excited to come back to NC but also sad to leave all my good people and friends here in Mississippi. I am so thankful for all the hospitality showed to me through my work, the Williams family, Roxie Gartman and Mississippi police force (lol). I am going to miss it, but I will be back, sometime soon.